There’s one on historical cartography, with old maps ranging from 1515 to 1720 depicting how Taiwan was once understood. Another, by “a brilliant tech guy”, is a challenging story full of twists.

Chen loved it. “Great for gamers, hackers, and crackers,” she says with a grin. She says my video-game-playing boyfriend should read it, if it ever gets translated to English.

“There are a lot of great books in Taiwan that never get to be read or published in other languages,” she sighs. “It’s really a shame.”

She’s also brought work by writers who have achieved a level of international acclaim.

There’s The Land of Little Rain, a novel full of evocative prose by Wu Ming-Yi. “Rain is falling in between words,” she translates. “Maybe the rain will bring everything up in the clouds back to earth.”

Finally, Chen pulls out a copy of Qiu Miaojin’s ’90s novel Last Words From Montmartre, a classic in the tongzhi canon, or Taiwanese LGBTQ+ literature. Taiwan made history this past year by officially recognizing same-sex marriages, becoming the first Asian country to do so.

Chen says queer literature in Taiwan has always been around. “Before, it was written very, very subtle. You’d have to sort of read between the lines.”

A 20-year veteran TaiwanFest volunteer, Chen only started running the bookstore back in 2016. This year, though, will be the first time she’s tasked with running two bookstores. One is set to feature female writers; the other, named Intriguing Connections, will be dedicated to Taiwan’s independent publishers.

“It’s a lot of work. But it’s good stress,” Chen says. “I’m very, very happy, because I’m doing something I love so much.”

Some of that joy comes from connecting with her former home. “I left Taiwan in 1987, and being a Canadian for that many years, I lost touch with Taiwan, especially with the publishing industry,” she says. “I’m well-read, but there’s so many things going on.”

A recent trip to Taipei introduced Chen to smaller-scale publishers, and she left impressed with their creativity and irreverence.

“The indie publishers are so vibrant,” she says. “They publish a variety of books, and from a totally different angle from the mainstream publishers.”

She gets frustrated with the writing out of the larger publishing houses in Taiwan and China. She says there’s a lot of self-censorship among writers—not just because of political pressure, but also as a result of the desire to please that accompanies fame.

And she knows well that feeling of biting her tongue. She’s lived it, growing up under martial law in Taiwan and then going on to a career in marketing and public relations. Neither period of her life allowed for much self-expression.

“When you are in marketing, you always have your market in mind, and you will try to write something that pleases them,” she says. “I guess that’s just a professional hazard.”

Luckily, things have changed in the country she once called home. “[Now in] Taiwan, freedom of expression is valued and preserved,” she says. “If you’re good at what you’re doing, you will have your niche market.”

Chen mentions a woman in Taipei who has been setting up pop-up bookstores all over the city.

“I love that concept. Just like now, my bookstore has a very short shelf life, too: three days. But, you know, we will touch people. And we will do whatever we can.”

Taiwan Bookstore runs August 31 to September 2 as part of TaiwanFest on the Granville 800 block. For details, open this link.

Read the full article on straight.com 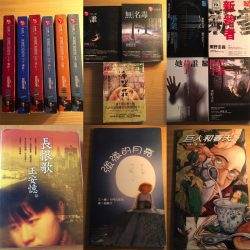